Been mega busy.  Fixed water butt on plot 7.  Put pavers down on plot 7.  Put new netting under Shed 7 after receiving a notice from the committee.  Harvested tons and tons.  Had potato blight - chopped down to ground next year getting a blight resistant variety,  Experimenting with a second lot of spuds in a similiar spot to the first earlies.

Monday 22nd August 2016
Have put some seed potatoes into potato bags for Xmas - once tomatoes are done these will be moved into Greenhouse is the plan.

Sunday 3rd April
On plot for about five hours digging in muck, absolutely knackered.  Got some first earlies in a bed on Plot 13 so a little bit of progress.  Got a metre squared bed sorted out with strawberry runners which is good'ish.   Some pesky beastie is digging up the recent onions that went into a patch on number 7 - very irritating.

Sunday 10th April
Got another five hours done - all on Plot 13 - got one bed ready for brassicas,   got some spuds in on a plot where brassicas had been.  Got bean row taken down as that's going to be on one of the beds at the bottom this year. am going to have to mow and what have you real soon.   Got another bed at the side cleared - got five bags of weeds taken to the recycling centre.  Got the raspberry patch all weeded as much as possible and plenty of muck chucked on.

Week ending 3rd April 2016
Got to the lotty.  Got three beds-worth of muck dug in.  Got two rows of first earlies (bottom left'ish of this photo) in the ground - it says they should be Duke of York.   Got my second strawberry metre squared sorted out.   All good stuff. 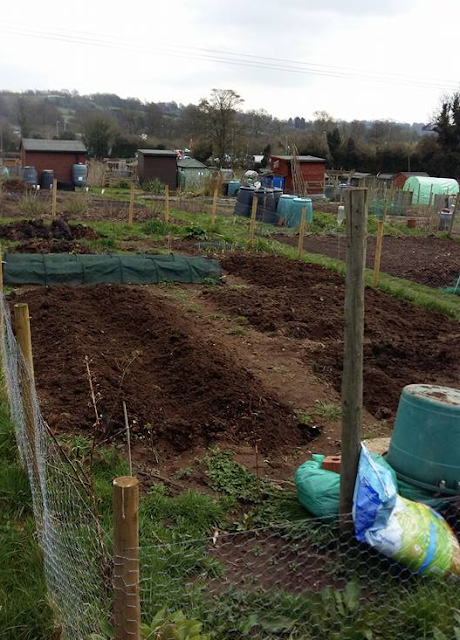 Not a lot to report.  Lots going on in the greenhouse but only got down to the lotty on a couple of occasions.  The main one being to take delivery of a couple of tons of manure.

Planted various bits and bobs in the greenhouse - will get a list sorted!

Weekending 14th February 2016
Went and cut down the raspberry canes at the plot and did a bit of tidying up.  Got paraffin heater going in the greenhouse and got peas planted. 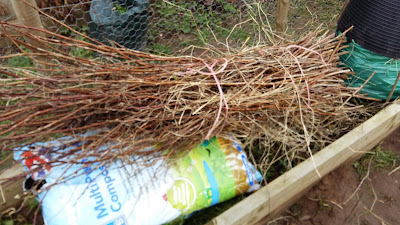 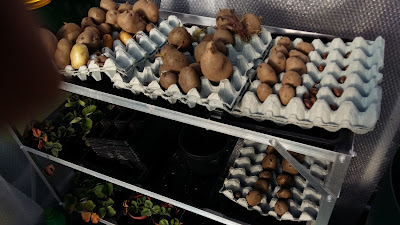 
Saturday 20th February 2016
Went down lotty to help with planting hedge along the Watery lane side.  Before anyone else arrived I took a barrow full of garden waste down to the recycling centre then helped until 11:30 with planting the hedge.    Did a bit of work in the greenhouse tidying up and thinking about how I'm going to partition the greenhouse off to make best use of the parrafin heater.   Did a load of measuring and think I'm going to either use some of that duct pipe to make a triangular frame or some cheapo wood if I can set some really thin rubbishy stuff.  Might just have a walk up to the warehouse at work and see if anything's being chucked.

Saturday 27th February 2016
Took a tub and 3 slabs down to the lotty and that's about it!!   Did a load in greenhouse though - got a partition up so now it's kind of like a 6 x4' greenhouse with a heater in it and a 6' x 6' un heated greenhouse on the other side.

Cauliflowers, peas, beetroot, french beans - everything beginning to pop up now which is good.  Sweet peas continue to look a bit ace.


Did some cabbages and purple broccoli as well this weekend - found out that you have to leave purple broccoli until the following year as well  - which is a shame as we dug it up at the end of the main season the first time I had a go!!

January 2016
13th - went to poundstretcher at lunchtime and poundland at night time - got a load of seed for coming year.  Need to be getting some spuds chitting soon as well.

Saturday 30th  January 2016
Almost end of month went down to see how bad the lotty was looking and the answer is that it's not too bad at all.  Brought up three bags of compost.  Took some rubbish down to the tip.  Weeded the bed with the onions and garlic in it - that seems to be coming on nicely.   Weeded the bed that will be having the beans in it later on in the year.

After driving back up from Birmingham after the Slimming World Woman of the Year competition.  Got me garlic in,  weeded bed number two, weeded bed number one and covered it up. Brought home a load of spuds, onions, a butternut squash that had been hiding, a cabbage, some sweet corn. Also got started on getting me paths in.  Put down some weed cover material, slabs and wood bark that have had on the plot for months and months (and months)  All good stuff.   Will have to put some time in next week as well.

Saturday 14th November 2015
Nipped down lotty, took five slabs, took rubbish off the plot.  Missus got a load of cabbages and stuff, found the garlic that had gone missing the previous week!   All good stuff.  Didn't stop too long.

Sunday 22nd November 2015
Borrowed Phil's van, fetched the non-finished water butt back home.  Drilled a hole for the tap and a hole for overflow pipe.  Got it back down and connected to the other one and water going in it already.  So pleased with that.  Got both bean rows taken down - the missus says to leave the bean plants on the ground cause that's what Monty Don does?  Got some more of the daffodils and tulips planted so pleased with that. Got the 8foot canes put away in the slightly longer than it should be shed 7 - am going to have to do some more tool hooks though as the canes are just covering the tools!  I know there's some spare hooks in Missus' shed at home.